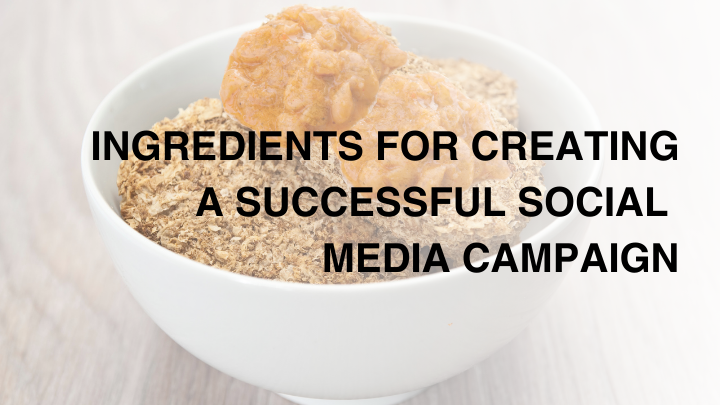 Over the last few years, there’s been a rise in the number of brands opting for a more ‘human’ approach to their social media marketing. You’ll have certainly seen this happening yourself – brands like Aldi and KFC have been the pioneers of more humour-focused, casual social approaches for years, but hundreds of major brands and organisations have been slowly adjusting their own B2C comms to follow. 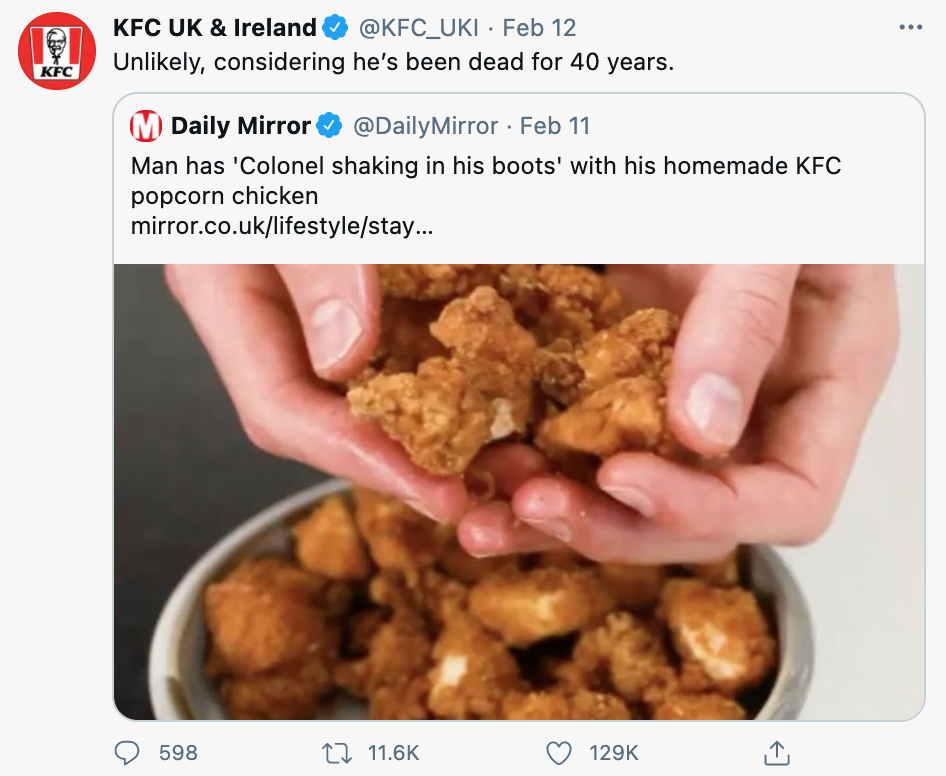 This week, we saw the clear culmination of this process thanks to the unlikely combo of Weetabix and beans. (We know, bear with us.)

On the morning of 9th Feb, Weetabix published a Tweet that brought the nation’s attention to an incredibly controversial food combination: Weetabix cereal biscuits and Heinz baked beans.

Unsurprisingly, this gained a lot of attention. People quickly shared their disgust and outrage in equal parts at the mere suggestion of this food combo. 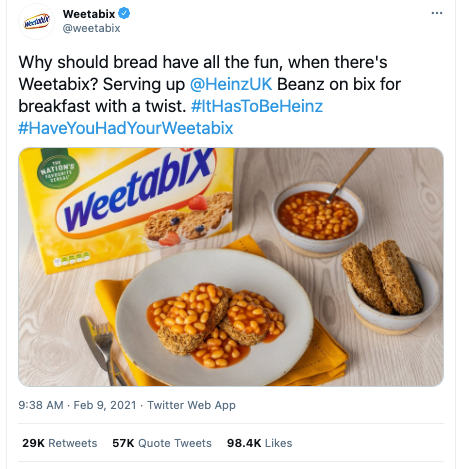 It’s not unusual for brands and organisations to comment on each other’s social post’s these days, yet on this occasion we saw something truly exceptional take place.

Dozens of brands jumped-in to back the opinion of the general public, quickly garnering enough attention around the post to cause a serious Twitter storm…

Household names like the NHS, KFC, Sainsburys, OFCOM, Dominos, National Rail, Lidl, Nando’s and lots, lots more chimed in. This was so exceptional both because of how many brands replied and because of how many of these replies would have traditionally been seen as ‘risky’ – especially for brands of their size and reputation.

So why was it successful?

Weetabix really nailed the shock-factor with this one.

It’s already well-established that ‘no publicity is bad publicity’ and Weetabix’s campaign suggesting people team their breakfast cereal up with another popular breakfast staple simply epitomises that. Scrolling through the hundreds, even thousands of replies, you won’t spot anyone in favour of switching out their milk for beans next time they fancy a bowl. But of course, that’s not the point.

They deliberately designed a food combo that would get a reaction. The result was just right to provoke a combination of confusion, shock and disgust in everyone – and it’s hard to get people to agree unanimously these days!

They took a risk

Why didn’t Weetabix collaborate directly with Heniz for this?

Whilst they certainly have enough clout to warrant an official collab, it was more beneficial for Weetabix to go it alone. Why? Because it meant they didn’t have to split the amount of engagement the campaign generated across two large channels.

Even though posting on both brand’s accounts would have given it a larger potential reach, it also would have diluted the message and we wouldn’t have seen the same big reaction from brands and the public.

Going solo was definitely the right call on this occasion.

Just as we mentioned earlier, more and more brands have been working to find a social media ‘voice’ that more closely resembles how a real person would interact on the platform.

As this now becomes truly mainstream, there’s a huge amount of novelty that comes with it. Simply, it’s funny to see big corporations, organisations and household names responding to things the same way we might expect our own friends too.

We’re learning to see these businesses more like interesting personalities rather than faceless corporations. It’s a relatively new concept so we’re yet to see how far this can be taken, but we’re definitely looking forward to seeing just where it goes.

But what about the risks?

There’s a reason it’s taken so long for brands to adopt a more personable approach on social platforms.

Creating a personality for a brand takes time. It needs to be believable, relatable and, most importantly, appropriate to the brand. It’s a complex thing to create and therefore takes time to be developed. Plus, the concept is so new there aren’t really any blueprints to follow yet either.

That means there are a lot of things that can go wrong during the process. Many large brands have teams of people behind their social media and so there needs to be ways of keeping messaging consistent regardless of who’s posting.

But even if that’s ironed out, it’s still possible for your audience to take things the wrong way, misinterpret a joke, or misunderstand your message – even when you thought it was clear. Giving a brand a personality also means it has to have opinions on things, which ultimately puts you at risk of upsetting some people.

Social campaigns like this come with some more mundane risks too. People simply may not get it and will ignore it, or a campaign may have all the potential in the world, but not quite reach the people it needed to so it could really take off.

In fact, Weetabix actually make three tweets with strange food combinations recently but the other two didn’t receive nearly as much traction. It takes the right (or seriously wrong) combination to create a truly viral social campaign. 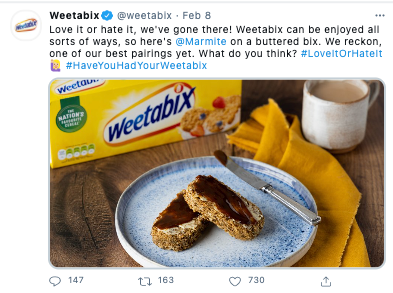 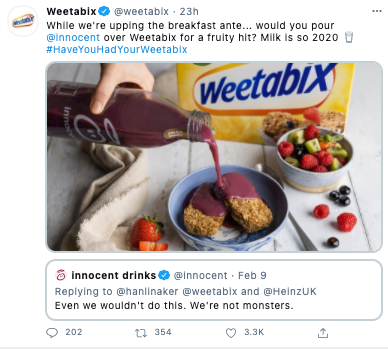 It’s rare for a brand to make a serious faux pas on social platforms, but when they do it can have unfortunate consequences. Take this example from British Airways…

In 2016, British Airways shared a deal on flights to London on their Facebook page – except it wasn’t their own, it was a deal from Virgin Atlantic. Initially, it was shared with no caption making it appear as if BA was promoting their competitor’s offering. Since then, the airline opted not to delete it, but change the caption and find a humorous side to the unusual share. 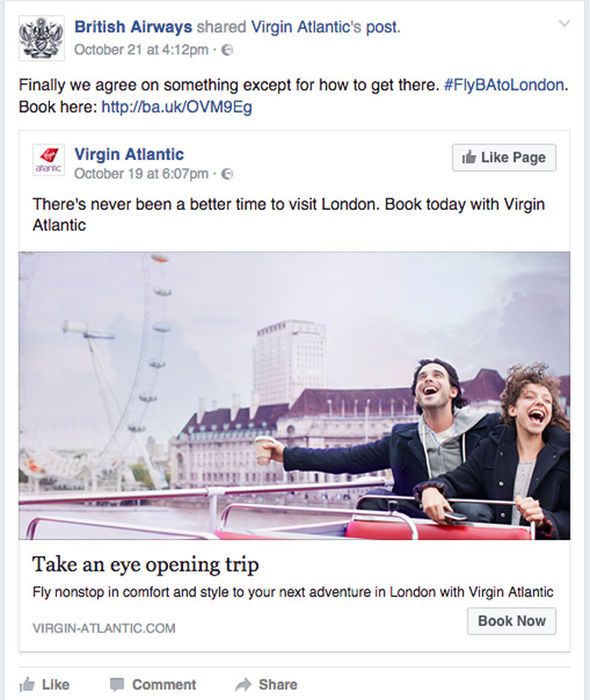 It was a great result for Virgin – at the time BA’s platform had over 2.5 million followers, whilst Virgin Atlantic’s had around 510,000. The gaff was spotted by social media users all over the world and extra publicity was garnered for both airlines.

Ultimately, we think it was admirable of BA to stand their ground and keep the post up – we’re sure most brands would have removed it and saved themselves the controversy. BA handled it like a champ, and Virgin made sure to make the most of their time in the spotlight.

So is the risk worth it?

If there’s one lesson to be learnt from this bizarre Weetabix campaign, it’s that the potential for success out weights any risks by miles.

Weetabix received over 100k likes, 87k+ retweets/quote tweets and 18k+ comments – all in one day!

We know first-hand that people have been sharing and talking about this with their friends, family, and colleagues ever since.

So, what actually goes into a successful marketing campaign like this?

Start by defining your target audience

You can make sure your campaign appeals to the right people by analysing your audience. Pay attention to things like who buys your product, where they are online, what they like and what they respond to.

When planning a potentially viral social campaign, there will always be some risk of backlash – no matter how inoffensive you think your content is. It’s always worth taking a good hard look at from the perspective of your target audience, just in case.

If you understand your audience well, the chances of them misunderstanding what you’re trying to do is incredibly low. But you’ll regret not reviewing it if the campaign does tank or worse, end up harming your business’ reputation.

Keep someone on stand-by

If your campaign works like you’re hoping for, you’ll need to have someone on stand-by ready and engaging with those who support your campaign. It’s important to be responsive whilst the bulk of interactions are happening – it’s a great way of keeping the hype going too.

Don’t be put off

Most things don’t go viral. That’s an important truth to keep in mind.

Often, it’ll be things that are actually out of your control that mean your campaign doesn’t take off like you’d imagined. You can have done everything right but being in the right place at the right time can sometime be 80% of why any given post goes viral. Annoying, we know.

So don’t get disheartened if you didn’t receive 100k likes the first time or even 100! You’ll learn something new each time you start a campaign, and eventually one will take off like a rocket.

We’ve been building social strategies, managing platforms and creating engaging content for years. Patch is a full-service digital marketing agency that’s got a serious knack for all things social. We can provide support alongside your own internal social media team, or build and execute a bespoke multi-channel social media strategy for your brand.

You can learn more about what we do on our social media page or get in contact with questions at info@patch.marketing or on 020 7952 1740.